Prior to the coronavirus pandemic, transport was the fastest-growing source of carbon dioxide (CO2) emissions in Ireland. There are signs that the "green recovery" could lead to a cycling renaissance in Ireland – but is this a false dawn?

COVID-19 has had a huge impact on our lives, and initially led to dramatically lower levels of car traffic on the roads during the height of lockdown. Carbon Dioxide (CO­2) emissions from transport are expected to fall by around 5% in 2020 as a result, but this drop won't be sustained into the future unless there is a long-term shift in how we travel. There is a need to focus on how to move away from oil-fuelled private cars, given the urgency of climate change and the Government's commitment to halve carbon emissions by 2030 and to reach a "net-zero" target by 2050.

Besides the stark impact of the lockdown on our travel behaviour, several reactions to COVID19 have in fact incentivised car travel, pushing up emissions. Public transport ridership has fallen starkly, partially because of the risk of virus transmission. The Government advises against travelling by bus or train except for necessary journeys, and car journeys have rebounded quickly in the wake of opening schools and workplaces. Traffic volumes are actually back to normal in some locations, and around 20% lower than would be expected at the national level.

Indeed, China’s CO2 emissions surged past pre-coronavirus levels following the lifting of restrictions, and the preference for travelling by car over public transport has risen. Apart from the concerns of virus transmission causing people to turn away from lower-carbon public transport, some cities have further incentivised private car transport by made parking free, or de-pedestrianised streets to facilitate access to city centres. Private vehicle transport is the most CO2-intensive transport choice after air travel.

However, there are many signs of promise that COVID19 could lead to a greener future. Governments are looking to stimulate economic recovery by investing in low-carbon infrastructure and other emissions-cutting measures. In Ireland, commitments to pedestrian and cycling infrastructure have amounted to €82 million, with additional funding for public transport. Local councils have also been embracing the opportunity by reallocating road space towards walking and cycling, in some cases on a dramatic scale, with over 2,300 kilometres of new cycle lanes and €1 billion of funding for cycling announced in European cities so far.

In Dublin, large-scale bus diversions have been implemented as well as restrictions on cars and a reallocation of road space to cyclists and pedestrians with the aim of turning Dublin city centre into a priority zone for pedestrians, cyclists and public transport. There have also been record sales of bicycles reported during the COVID19 pandemic.

Is this in fact a new cycling renaissance? To understand what long-term trends might be emerging from this pandemic disruption, we examined cycling and car traffic counter data in Dublin, comparing hourly trends for both modes before and after the lockdown. Nothing beats real-time data for understanding traffic patterns, and Dublin City Council have maintained a cycle counter at Grove Road, which is a key cycling route in Dublin city centre, since 2012.

As expected, the number of bikes passing the Grove Road counter is down overall this year, with a 72% fall in cycling during the morning peak in June this year compared with 2019. However, a key exciting insight is that off-peak cycling numbers are up 45% over the same period, indicating the possibility of a very promising trend for cycling in the future. 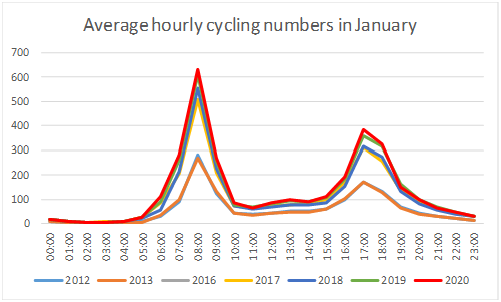 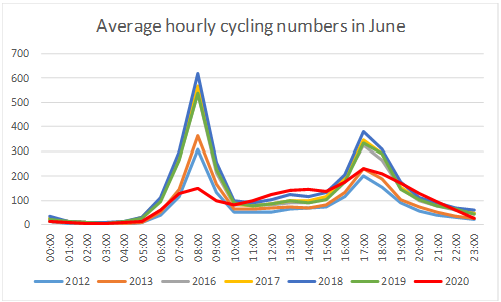 January 2020 had the highest cycling rate since the Grove Road cycle counter began recording data, and peak cycling rates have nearly doubled since 2012. However, the rate of increase has slowed in recent years, and looking at longer-term trends, we are recovering from a historical ebb in cycling for mobility in the 2000s. According to census data, only 2% of people cycled to work in 2006, down from 7% in the mid-80s. This number has only risen to 3% in the latest census in 2016.

Ireland also has low cycling levels compared with many other European countries. For example, only one-fifth of trips under eight kilometres are completed by walking or cycling in Ireland (two-thirds are by car), while the proportion of trips under five kilometres completed by bike in The Netherlands is three-times that of Ireland.

The weather doesn't explain this trend. The Grove Road cycle counter data shows that cycling numbers in mid-winter are similar to those in summer.

What does explain these figures is the safety of cycling. The "renaissance" of cycling during the pandemic was very likely enabled by the low traffic levels. The National Travel Survey suggests that 32% of people would be encouraged to cycle more with safer cycling routes.

As of mid-September 2020, six cyclists have sadly died on the roads so far this year, compared with eight in all of 2019, a worrying trend.

Another key insight from the National Travel Survey is that for a significant cohort of younger people, they have no alternative to cycling – many don't have access to a car, and public transport doesn't serve many parts of the country adequately. This highlights that the provision of cycling infrastructure provides the greatest benefit for a cohort deemed to be suffering disproportionally from the economic effects of COVID-19 restrictions.

These data point to the very strong justification and need for segregated cycling infrastructure. There are many positives to cycling other than emissions reductions: the main reason that people cycle is simply because they enjoy it. It also keeps them fit, and it’s a cheap, convenient and flexible mode of transport.

Dr. Hannah Daly is a lecturer in Sustainable Energy Systems Modelling in UCC.

Vera O’Riordan is a PhD researcher with the SFI MaREI Centre for Climate, Energy and Marine at the Environmental Research Institute in UCC.

Isaac O’Sullivan Hourihan is a research intern with MaREI.

Your email address will not be published. Required fields are marked *